Here is the 850MB temperature anomaly from Tuesday to Friday, which shows a very warm air bubble in place over the central United States on Tuesday before the arrival of a much colder than average air mass for the 2nd half of the week.

Here is the NBM’s extended temperature forecast for Minneapolis, which shows mild temperatures in place through Tuesday before the bottom drops with highs not warming until the 60s. It also looks like we could see an extended period cooler temperatures until the last week of September. Stay tuned! 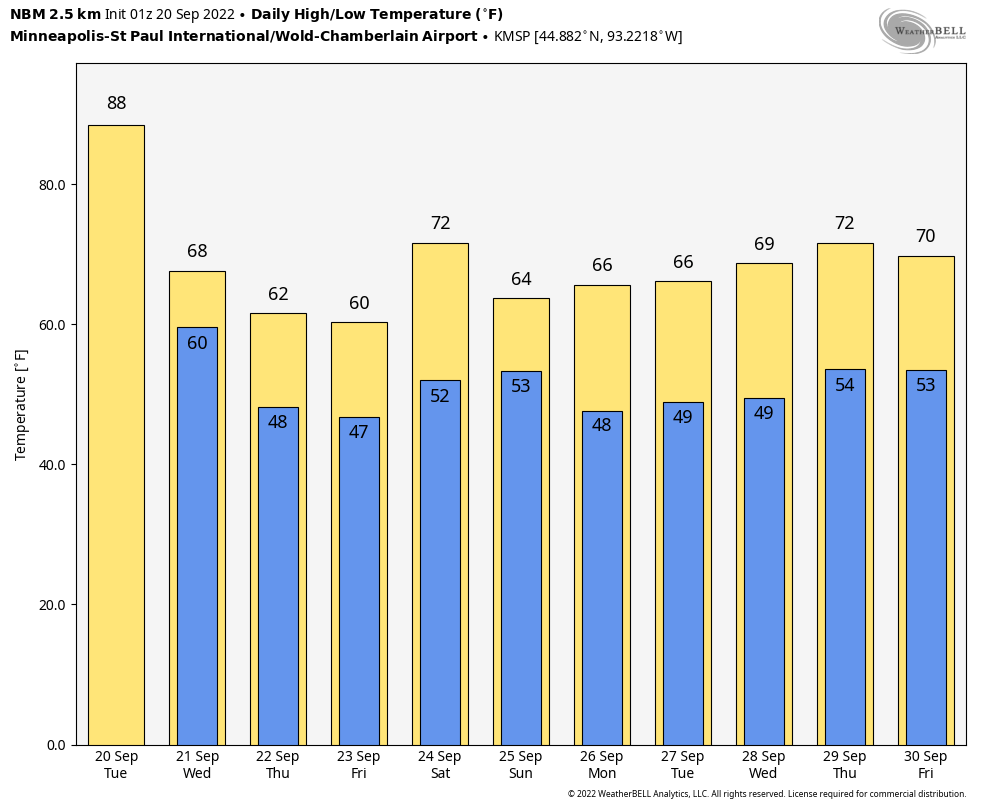 It’s that time of year again for fall colors and the MN DNR has its fall color detector up and running. Much of the state is still colorless, but there are a few colors showing up here and there. 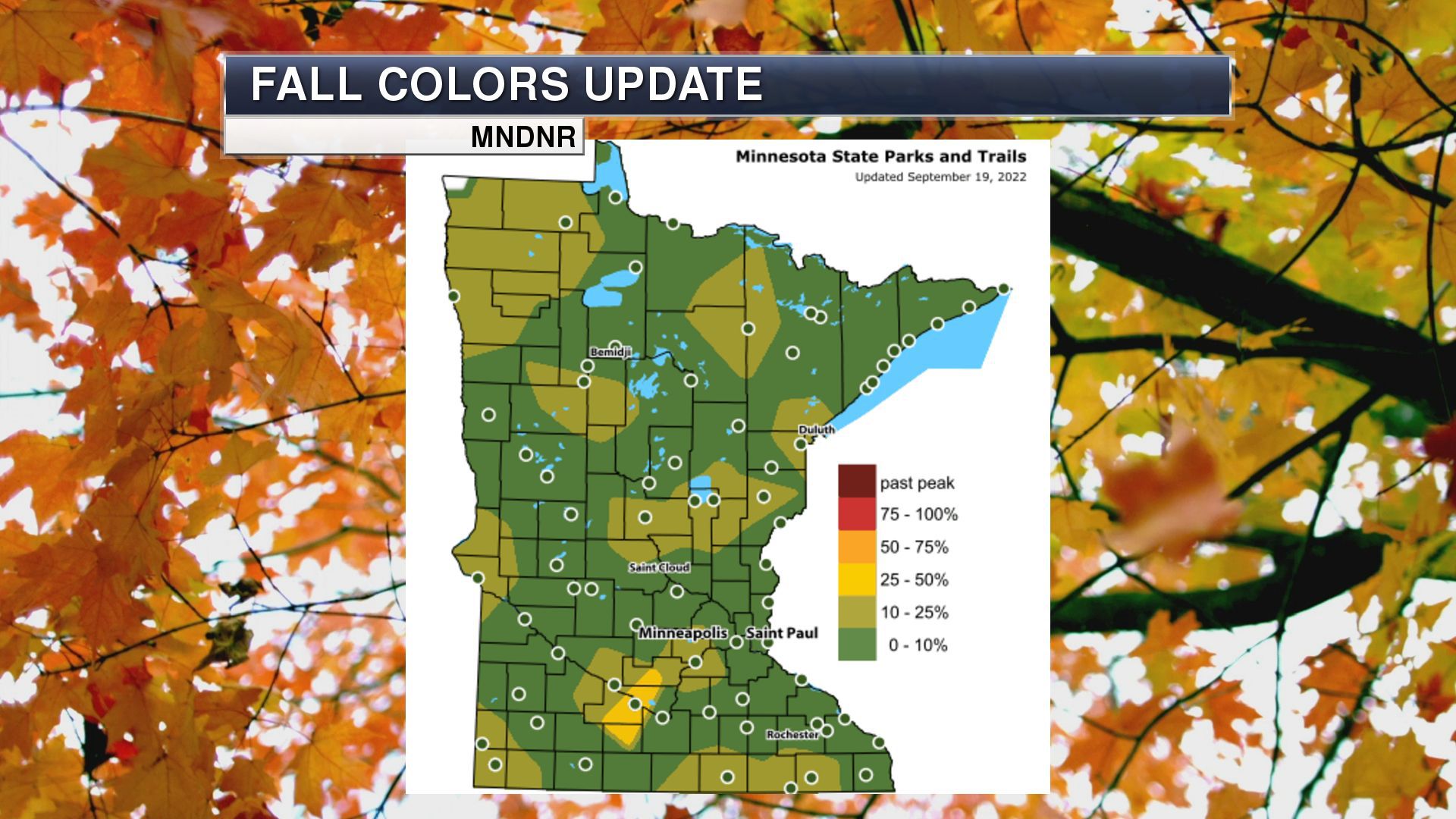 The MN DNR has put together a nice chart that shows the typical dates of peak fall color. The northern part of the state begins to peak from the 2nd half of September to early October. Meanwhile, people in the central part of the state and in the metro usually don’t see peak color until late September through mid-October. It won’t be long now – enjoy! 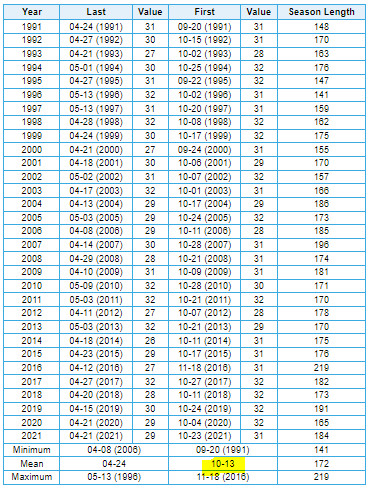 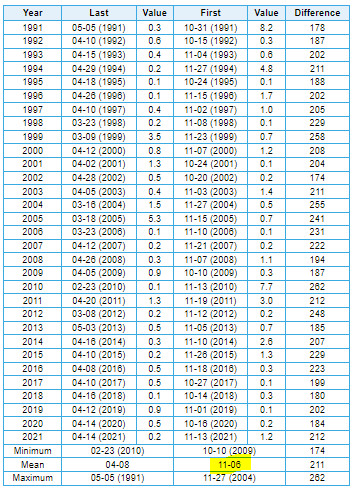 Here is the weather forecast from Tuesday morning to Monday morning. Weather conditions are expected to be fairly calm over the next few days, but there is a slight chance of rain this weekend. Stay tuned. 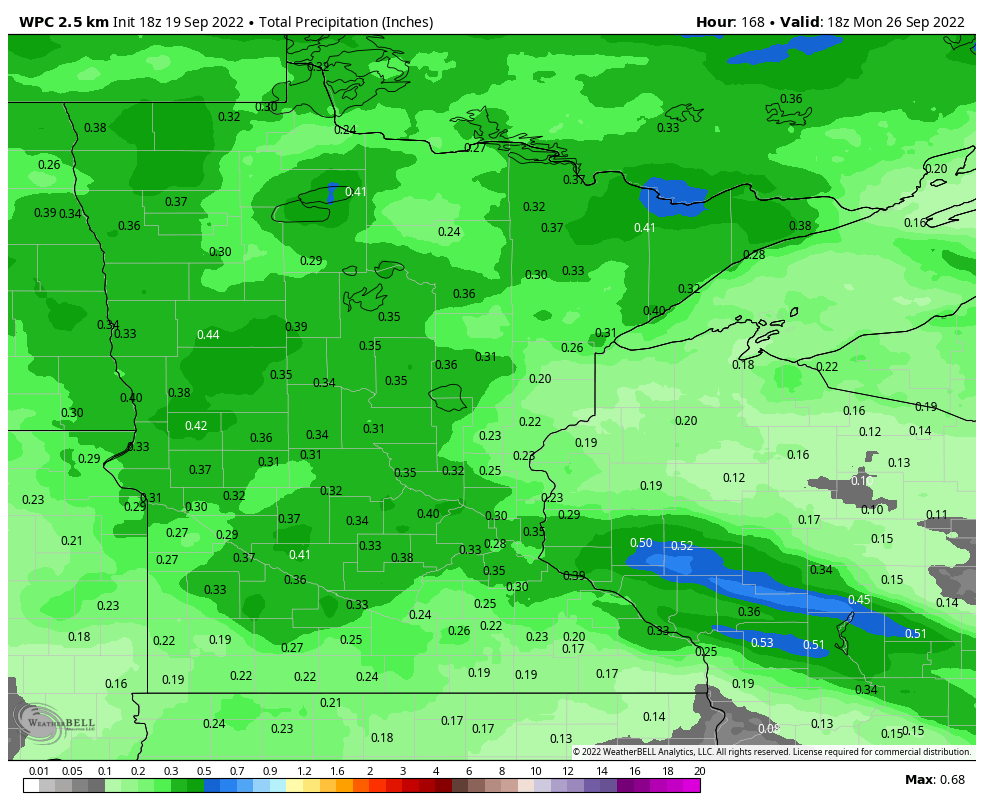 Here is the latest update on the drought in Minnesota. As of September 13, we still have a slice of moderate to severe drought conditions extending from the Twin Cities Metro to the Minnesota River Valley. 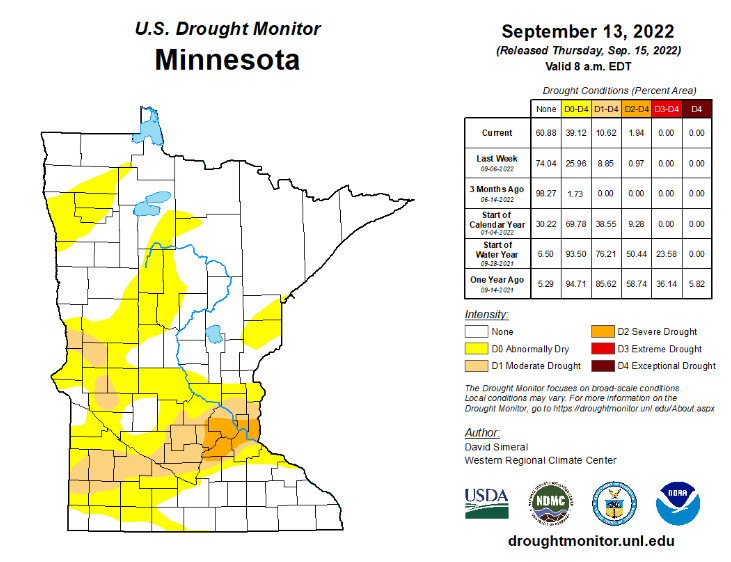 Sunday’s weather forecast shows lingering showers over Arrowhead and Wisconsin, while drier weather will occur a little further west. Temperatures will warm into the 60s and 70s, which will be a bit above average for mid-September. 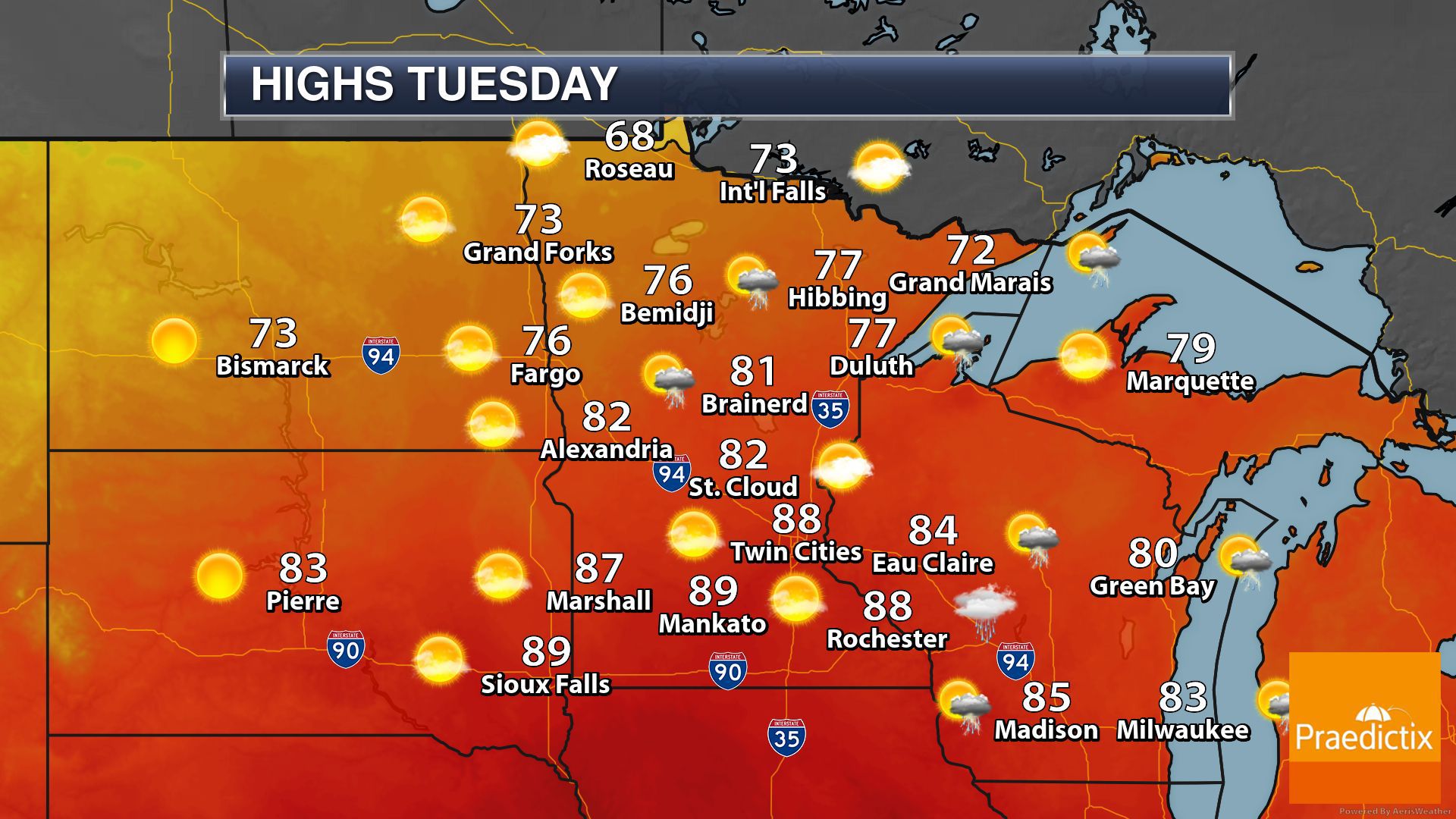 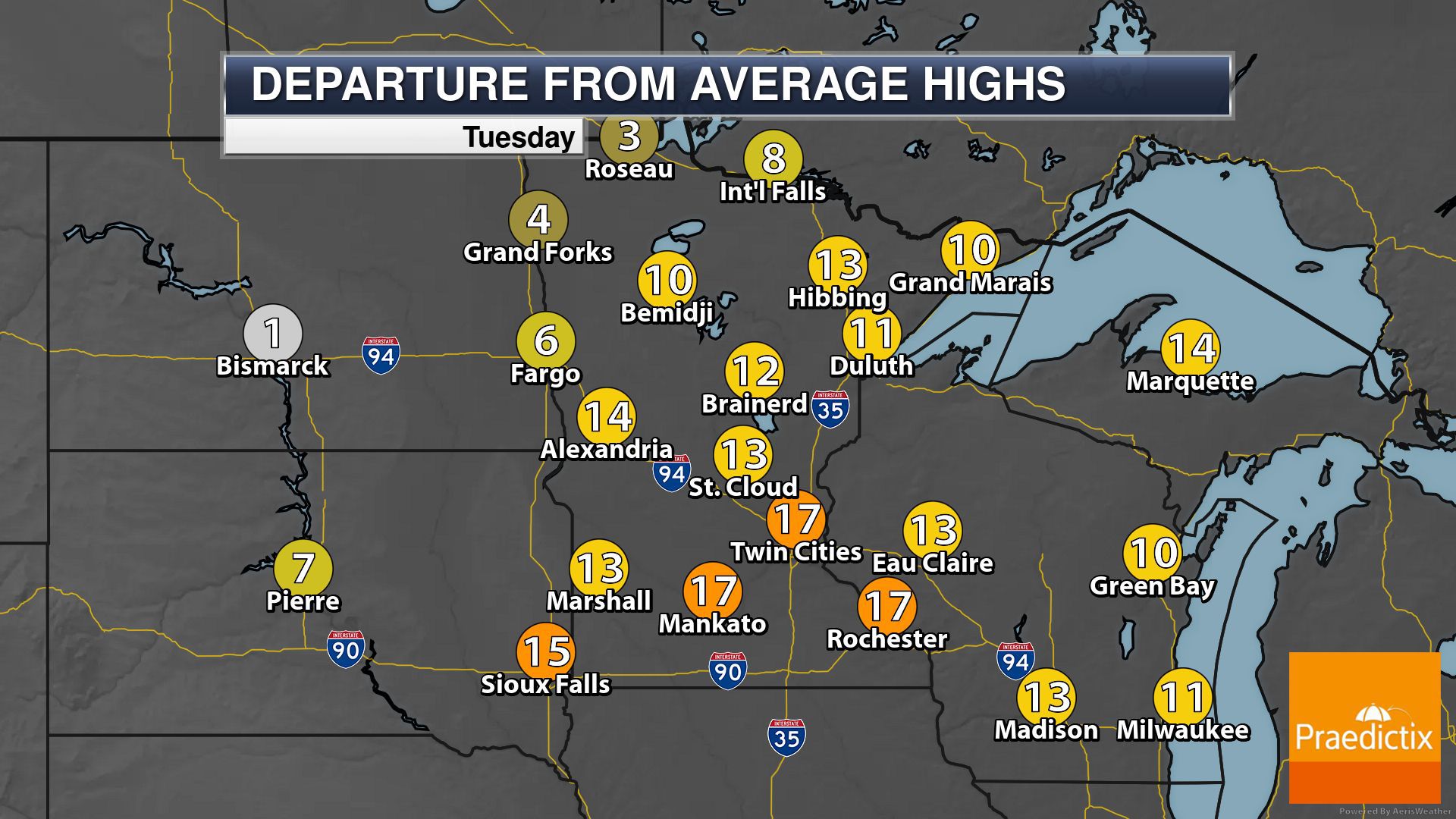 The weather forecast for Minneapolis on Sunday shows lingering clouds for the first half of the day with temperatures warming to the mid-70s in the afternoon. Winds will be out of the WNW around 5mph-10mph. 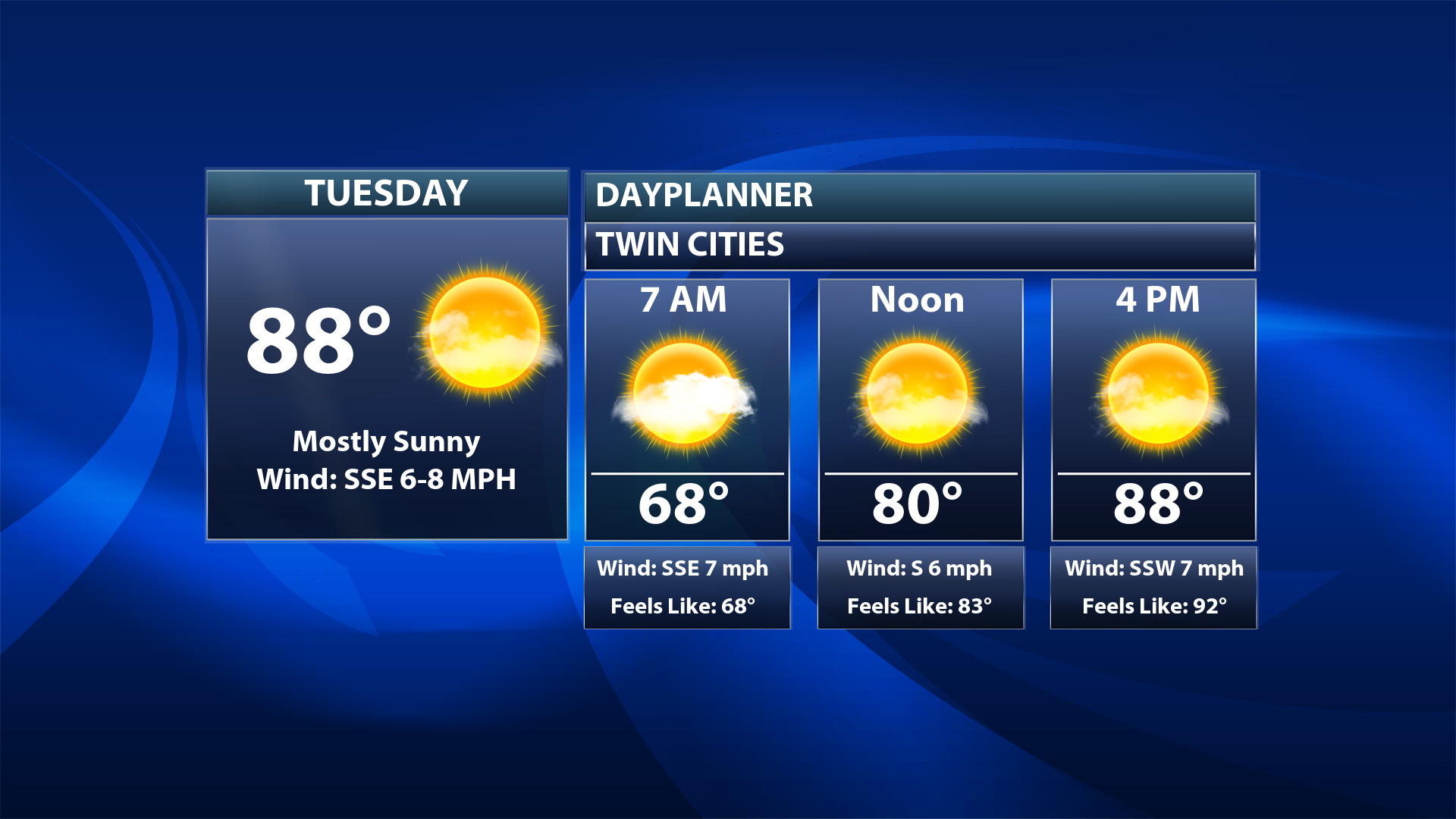 The extended weather outlook over the new days shows sticky dew points in the 60s through early next week. By Wednesday and Thursday, not only will we see cooler temperatures, but the dew points will also start to drop! 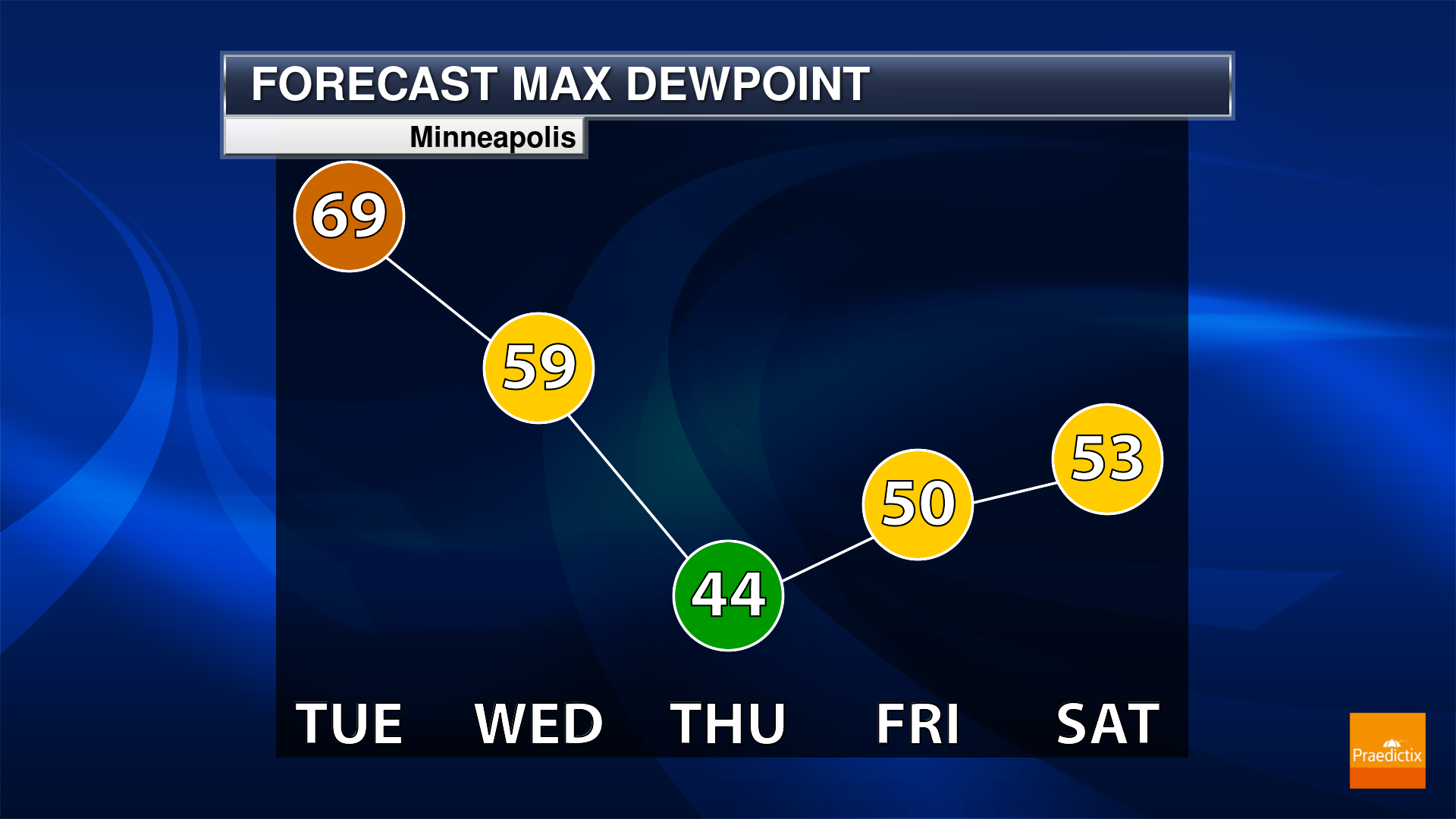 The hourly forecast for Minneapolis on Sunday shows temperatures starting in the mid-60s in the morning with highs reaching the mid-70s in the afternoon. Cloudier skies will persist for the first half of the day with more sunshine expected in the afternoon. WNW winds will be gusting near 10mph-15mph throughout the day. 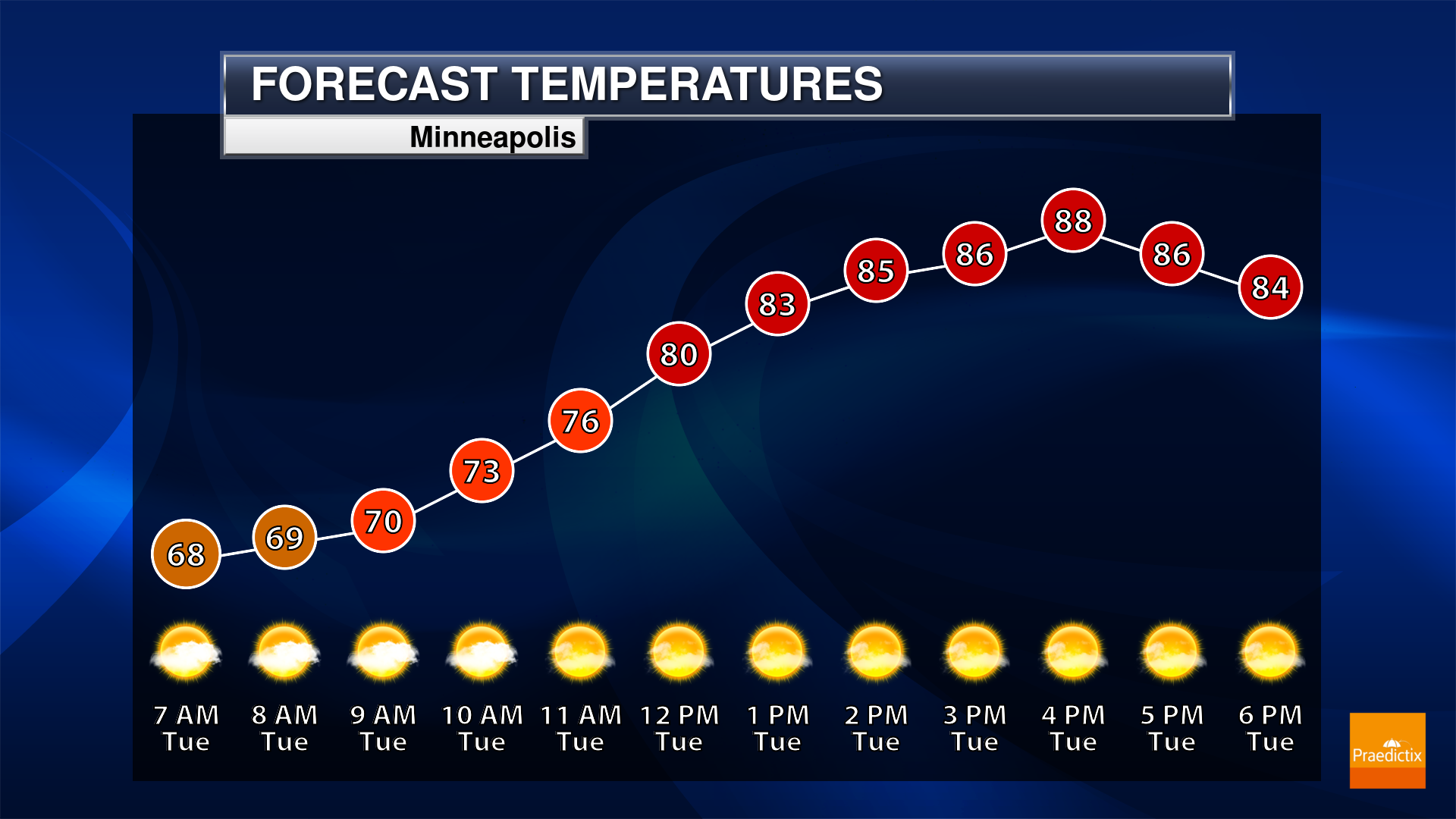 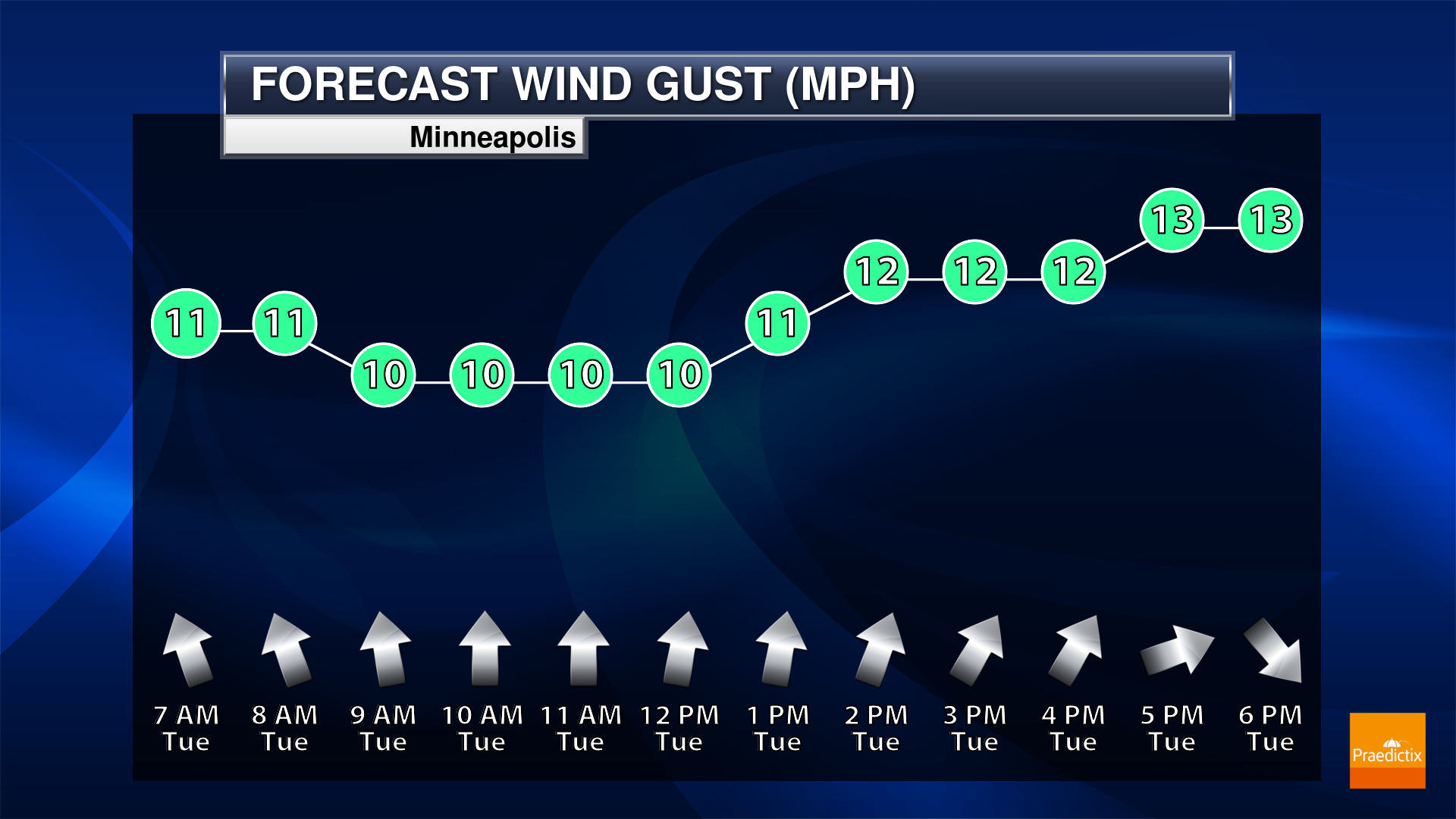 The extended temperature outlook for Minneapolis shows readings well above average near +5F to +15F through Tuesday. A front moves into Wednesday with much cooler temperatures later in the week. In fact, highs in the 60s will be nearly -10F below average for a change. 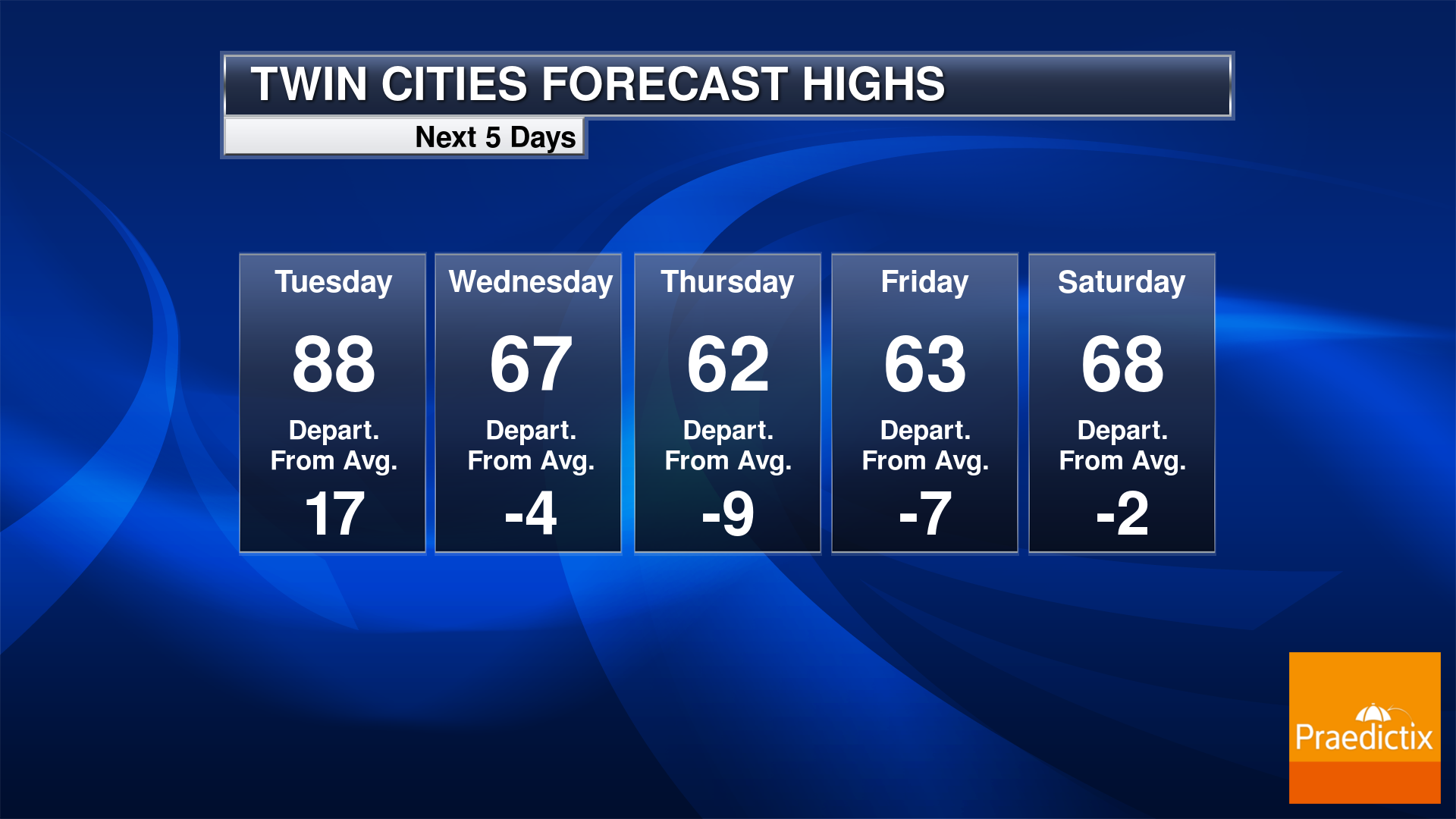 The extended weather outlook over the next 7 days shows warm temperatures in place through Tuesday before a few showers and cooler temperatures arrive later next week. Note that temperatures could dip into the 60s with overnight lows in the 40s on Thursday and Friday. 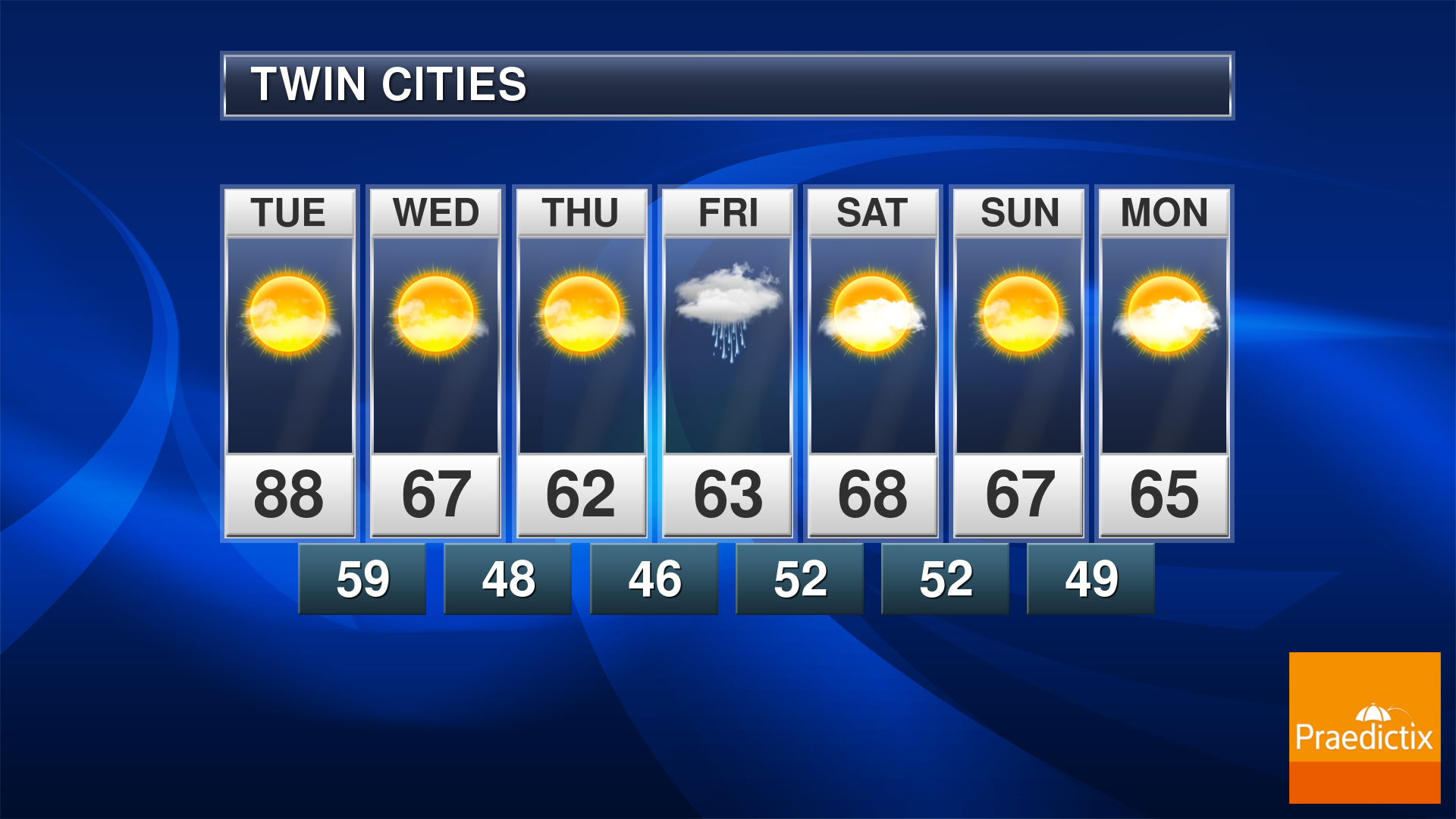 According to the ECMWF’s extended temperature forecast, readings will still be fairly mild through the first part of the week, but will cool down a bit as we approach the end of the week and the end of the month. 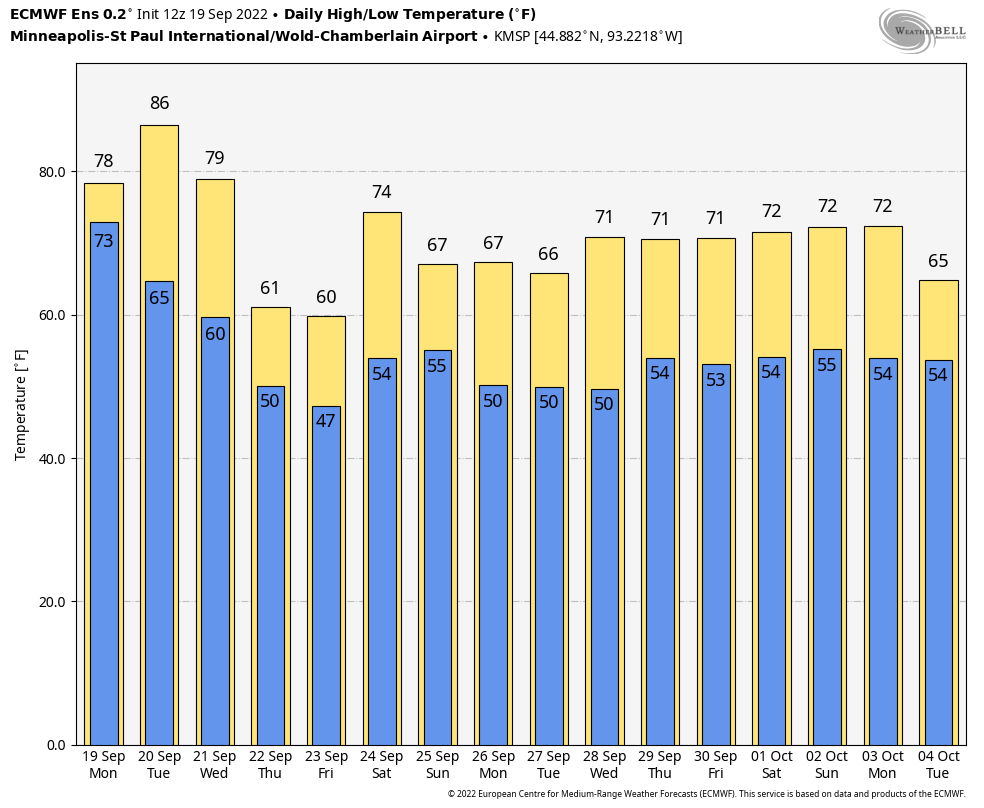 According to NOAA’s Climate Prediction Center, 8-14 day temperature forecasts show above average temperatures across much of the southern and western United States. 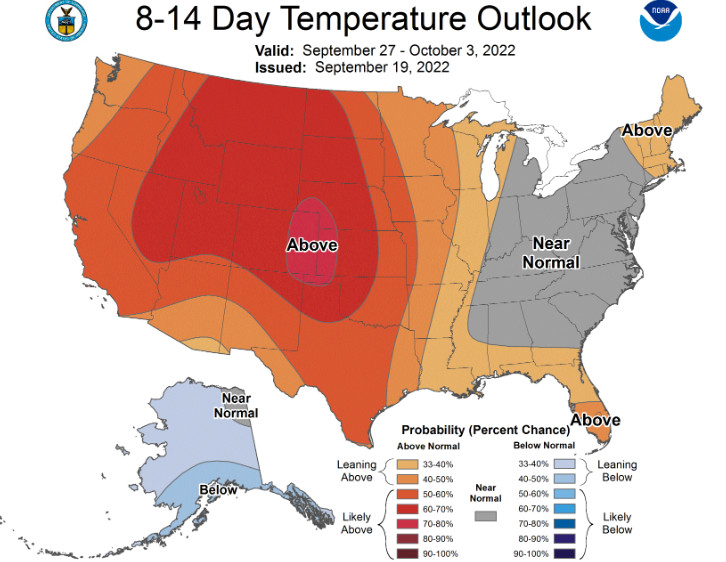 According to NOAA’s Climate Prediction Center, the 8-14 day rainfall forecast shows dry weather in place across much of the northern part of the nation and central United States. 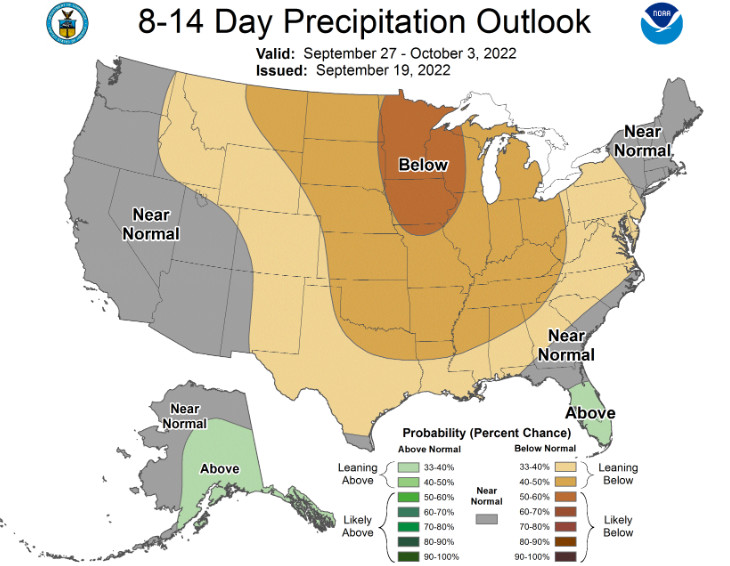 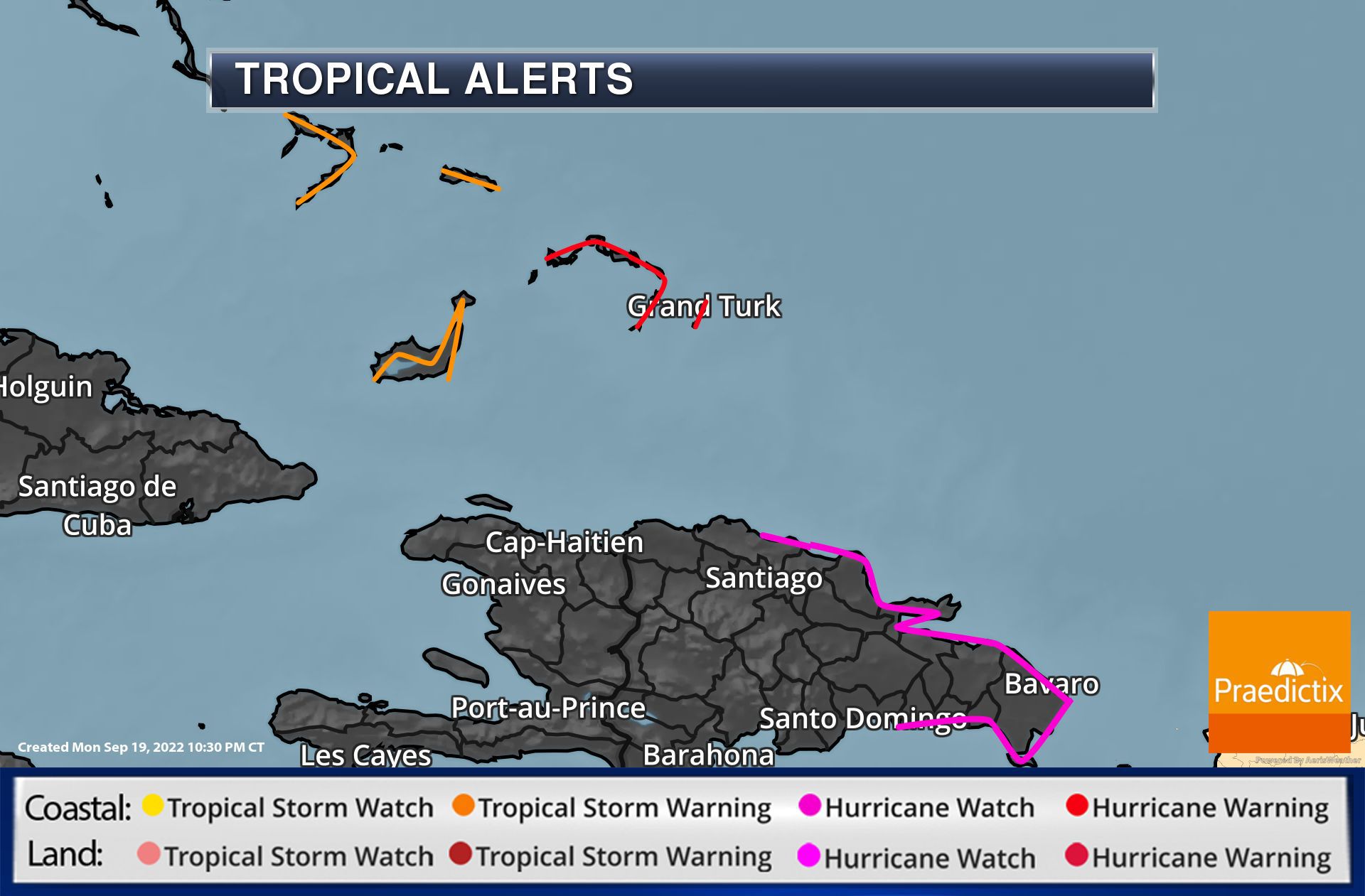 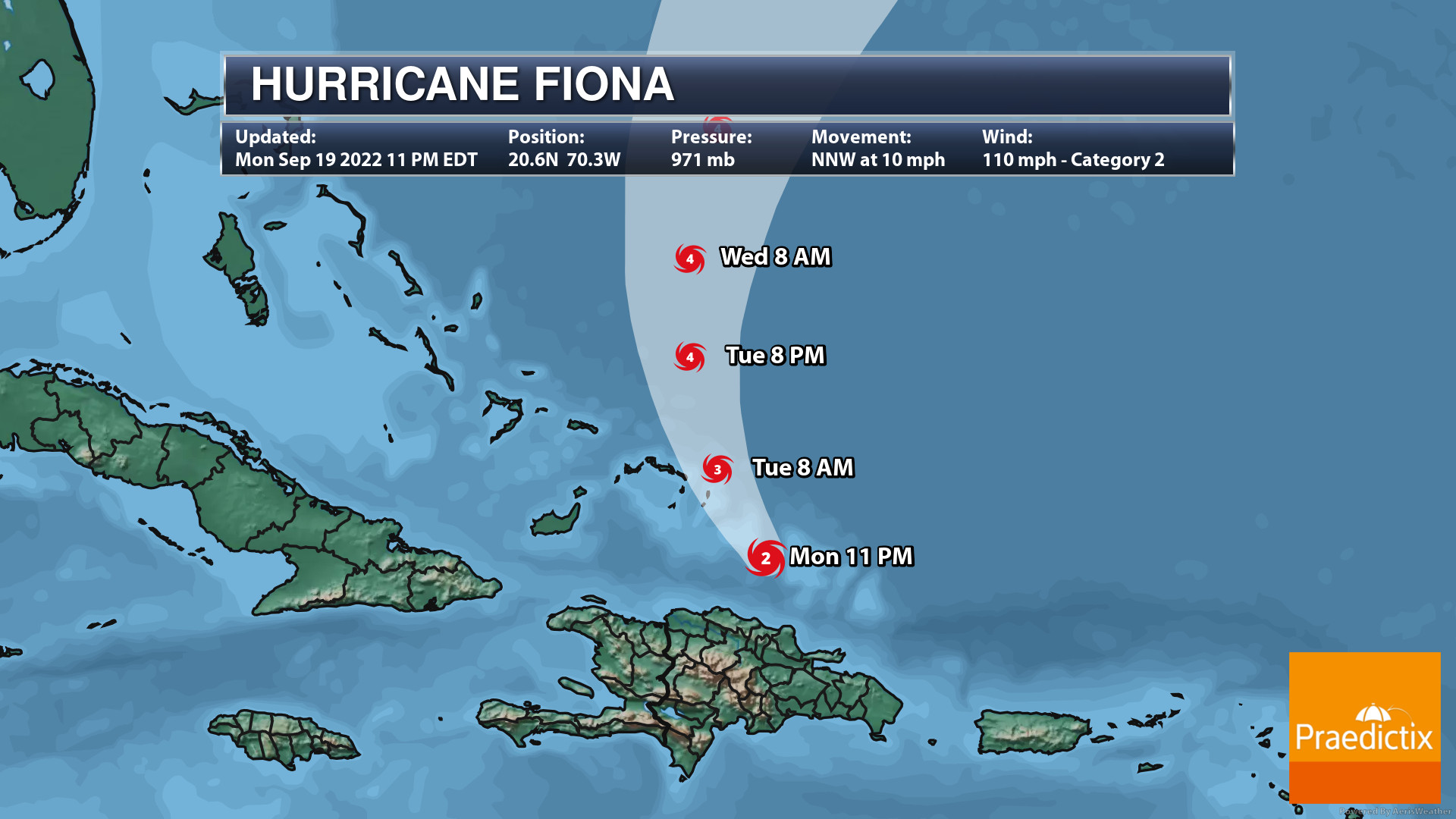 “The mist comes on little cat feet. It sits gazing at harbor and city on silent haunches and then passes,” wrote Robert Frost, a gifted poet. Not a meteorologist with a made-up name. Just to be clear.

September is foggy season in Minnesota. The nights are as long as they were in March, but the summer humidity persists, creating a weather recipe for “lazy clouds”. Clear skies and light winds allow the temperature to drop to the dew point, causing clouds to form at ground level.

Another summer heat surge kicks off the mid 80s today with some scattered T-storms possible. A strong northwest wind treats us to 60s on Wednesday, and outer suburbs can wake up to 40s on Thursday and Friday morning. No gel yet, but I’ve just dragged a few sweatshirts into my closet, just in case. Yes, our T-shirt days are numbered.

“Fiona” brought 90mph winds and 2ft rain to Puerto Rico. The ECMWF (which often does a better job with tropical systems) brings a major hurricane to the Gulf of Mexico late next week. We will see. 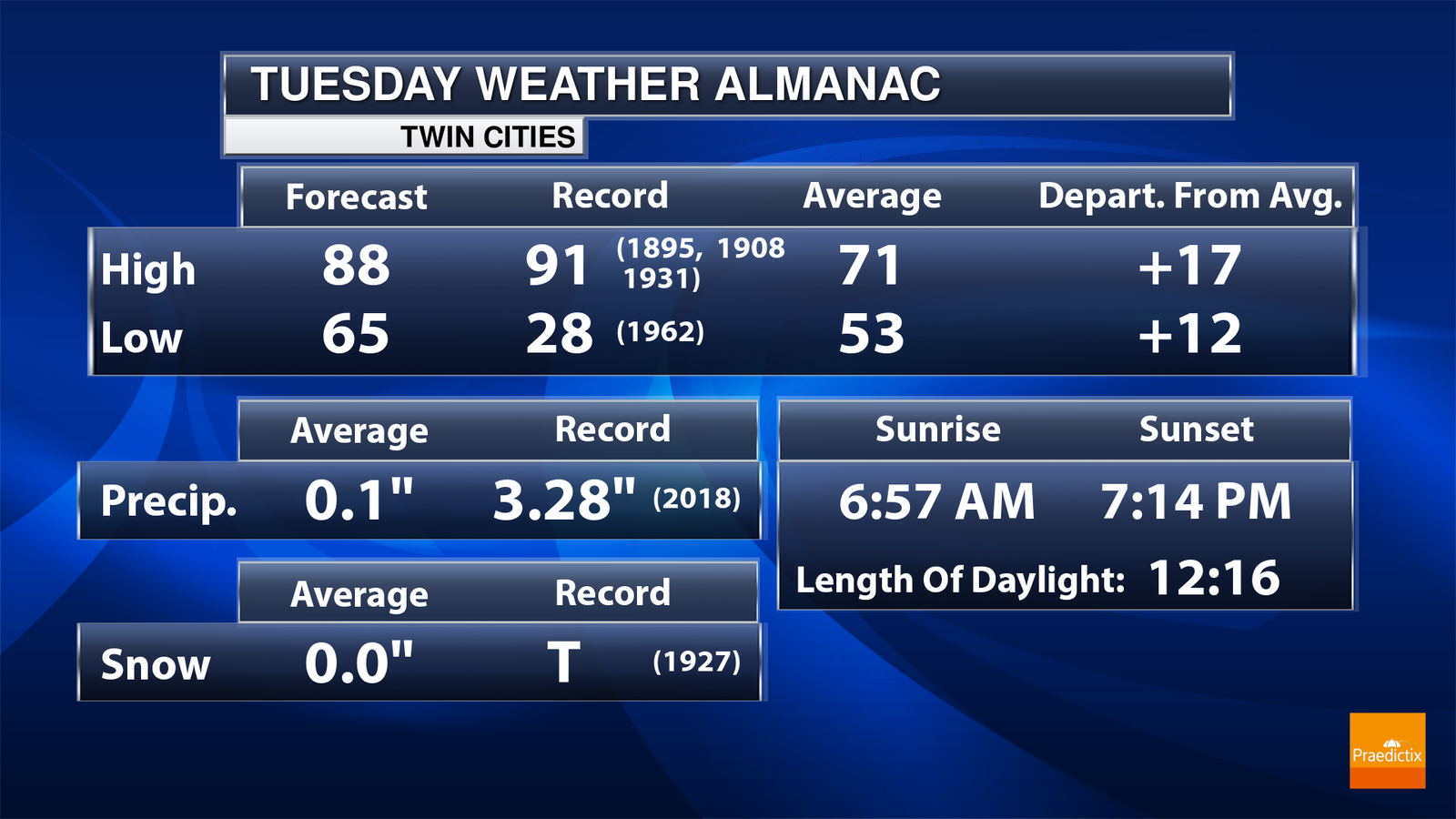 1.4 days after the last quarter moon 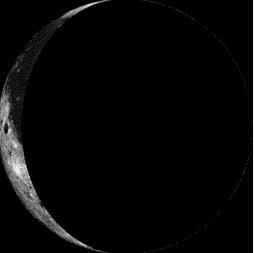 Here are the high temperatures expected in the central United States on Tuesday. All the figures that are framed would be records for the day of Tuesday, September 20. 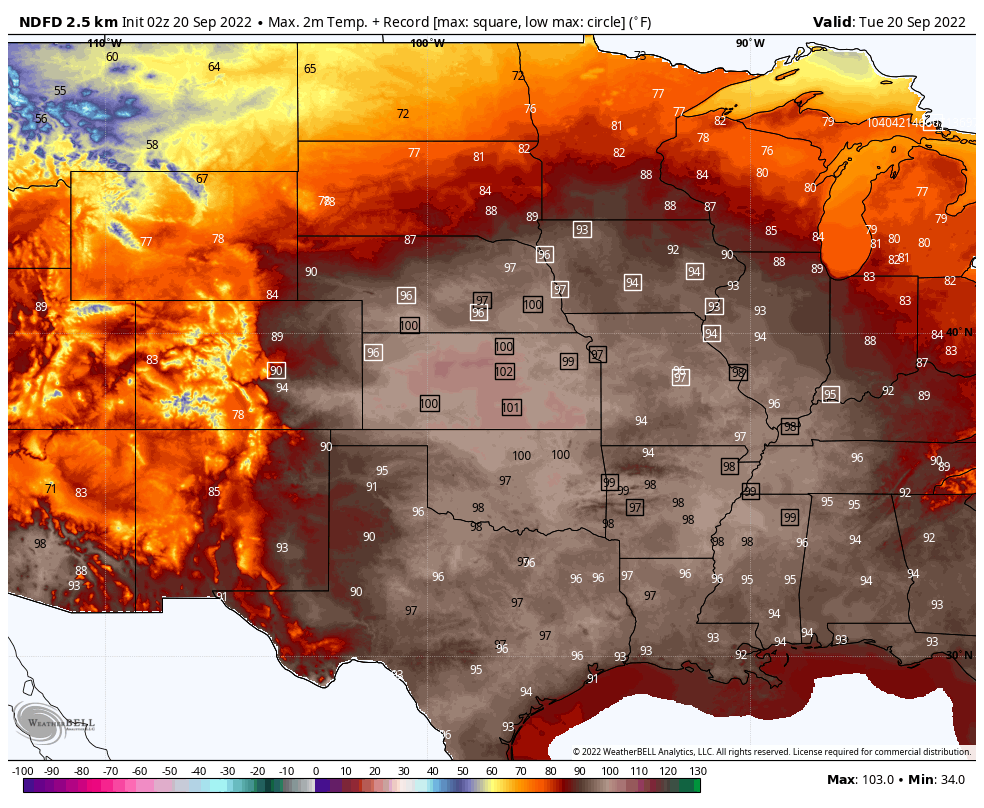 Tuesday’s weather forecast shows well above average temperatures in place in the central United States, where record highs will be possible. Times in Billings, MT will be a bit cooler behind a cool front which will bring much cooler readings to the Midwest for the 2nd half of the week. 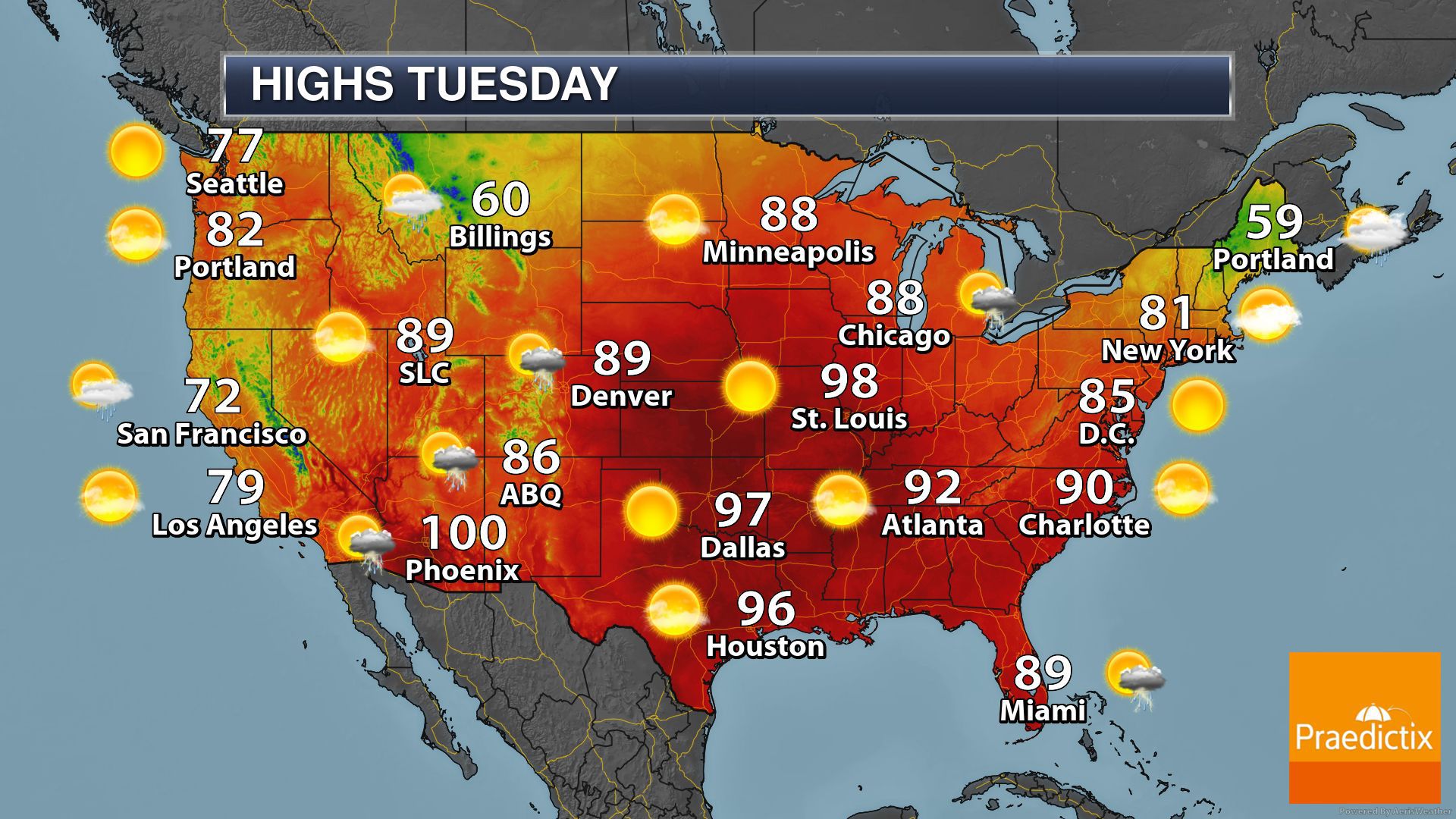 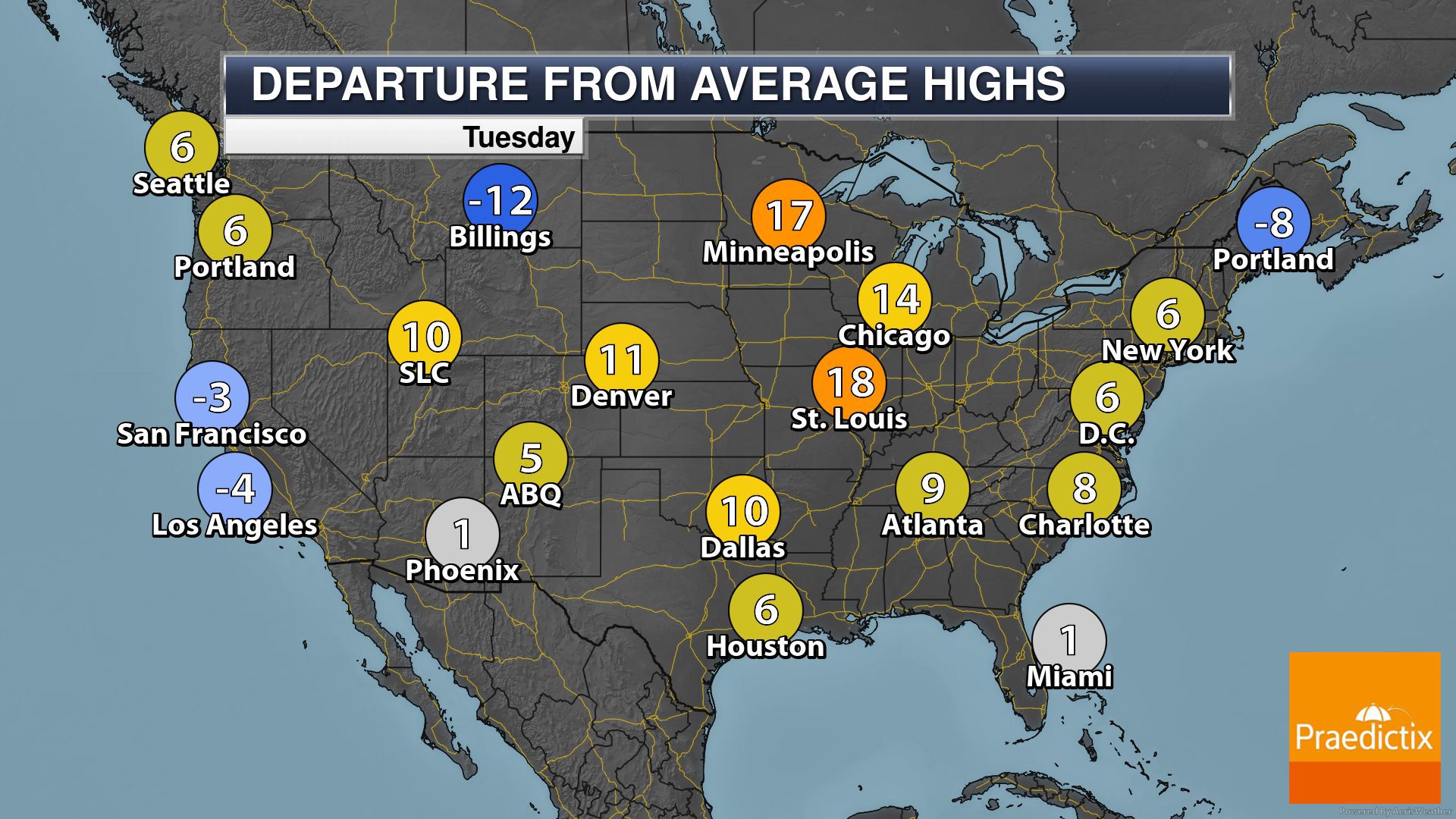 Showers and storms will move into the Great Lakes and Ohio Valley, some of which could be heavy to severe with locally heavy rain. Areas of rain will also move into California with high altitude rain and snow showers. 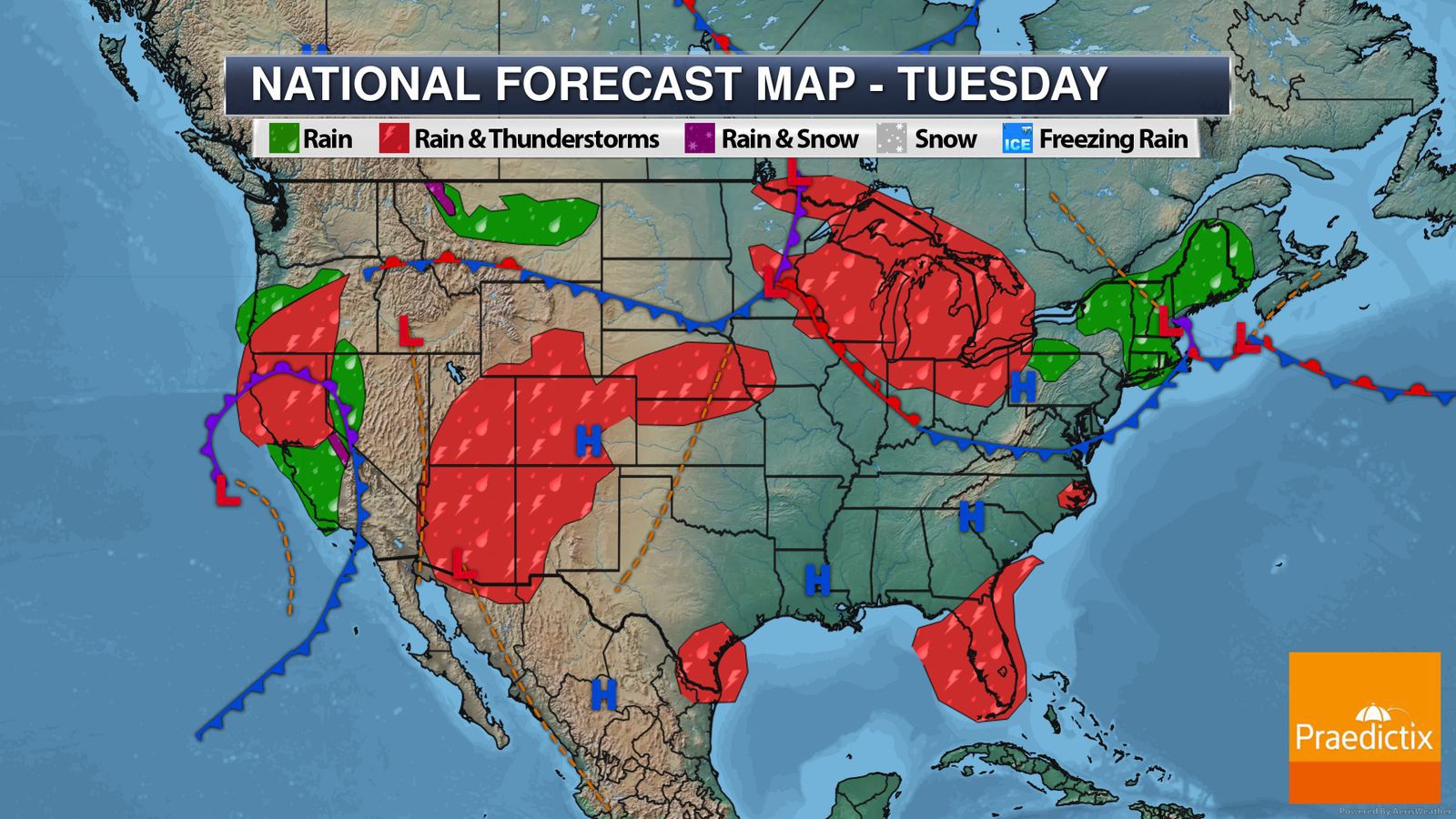 Here is the weather forecast through Wednesday, which shows an area of ​​widespread precipitation moving westward across the United States. This will bring much needed rainfall to many places.

According to the NOAA Weather Prediction Center, there will be areas of unstable weather across the country. Some of the heaviest rainfall will occur in the northeast and also in the desert southwest.

In Utah, the drying up of the Great Salt Lake is causing horrific pollution as it expels dust along with toxic chemicals like arsenic into the air. The Great Salt Lake is the largest saltwater lake in the Western Hemisphere and is drying up due to climate change and water usage in the state. The water fell to the lowest point in history. When the water dries up, remnants of the dry lake bed can be blown away by high winds and carried to nearby communities like Salt Lake City. Heavy metals like arsenic, along with calcium and sulfur, are released into the air. The Environmental Protection Agency says breathing arsenic can cause lung cancer, as well as skin, cardiovascular and neurological problems. Parts of the exposed lake bed are also contaminated with tailings from copper and silver mining.

“Deadly floods In Pakistan. scorching heat and Forest fires in the American West. Torrential rains in Australia and Indonesia. A mega-drought in Brazil and Argentina. As climate change pushing weather disasters to new extremes, it’s La Nina, an atmospheric phenomenon, that has been causing chaos since mid-2020. And now the planet is on the cusp of something that has only happened twice since 1950 – three years of La Nina. Another La Nina year means the world is racing towards $1 trillion in damage from weather disasters by the end of 2023. Floods, droughtsstorms and fires will destroy more homes, ruin more crops, further disrupt shipping, hamper energy supplies and ultimately end lives. »

“The World Meteorological Organization (WMO) predicting that the current phase of La Niña will likely continue for the next six months, making it a rare three-year-old La Niña and the first of the century. “It is exceptional to have three consecutive years with a La Niña event,” Professor Petteri Taalas, WMO Secretary General, said in a statement. While the El Niño and La Niña phases are complex weather patterns, in short, they refer to rising and falling temperatures in the eastern Pacific Ocean. The cooling phase is La Niña while the warming phase is El Niño. In an El Niño year, the warmest waters of the Pacific gather at the northern end of South America. These fluctuations in ocean temperature drive global weather events.”