AAirlines always seem to have one more trick up their sleeves to add fees to the cost of the plane ticket. Anyone who has flown in the past few years knows that some airlines now charge for basic items, like carry-on baggage and a printed boarding pass. Yet a sneaky charge is often overlooked by even discerning travelers: seat selection fees.

At first glance, these fees are not complicated. Some airlines will allow you to select a specific seat for a surcharge on the base price of your ticket. However, the way the fees are presented is often misleading, giving the impression that you have to select a seat and pay the accompanying fees.

This approach, in which companies add fees throughout the payment process, is called “drip pricing” by experts. And research indicates that this is an effective sales tactic, both for confusing customers and driving up overall prices.

But here’s the problem: you almost never have to pay these fees. Here’s how to avoid – or at least minimize – those pesky fees.

While it might sound scary, there’s one weird trick the airlines don’t want you to know: you don’t have to choose a seat. On most airlines, you will be assigned a seat at check-in or at the boarding gate if you don’t already have one.

Some airlines give the impression that you have to (or at least should) select a seat when paying. Frontier Airlines even has a graphic interstitial page explaining why selecting a seat is such a great option.

Do not fall into the trap. You can still skip the seat selection and save some money, but keep a few things in mind:

Part of what’s so confusing about these fees is the inconsistency with which the industry enforces them. Unlike change and cancellation fees, which most US airlines have recently waived, many airlines appear to be increasing additional fees on seat selection.

But some charge a lot more than others. 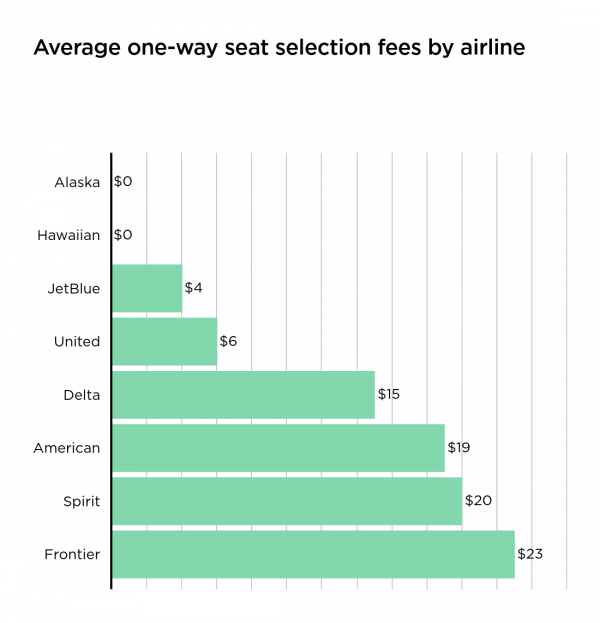 Airlines with modest seat fees (less than $ 10 per leg):

Airlines with high seat fees ($ 15 and more each step):

Southwest Airlines does not technically charge or allow seat selection in the same way as other airlines, so it is excluded from this data. But you won’t be charged a seat selection fee on Southwest upon checkout, so this is a good option as well.

Roll the dice with an upgrade hack

As a regular and occasional traveler, it’s difficult to get a seat upgrade these days. However, skipping the seat selection sometimes offers the possibility of ending up with high-end seats.

Here is how it works. Airlines now offer a â€œpremium economyâ€ or similar fare. Sometimes all the right seats, including the exit rows, are considered premium. Airlines try to charge extra for those seats, but if no one takes them and the flight is full, they have to assign them to someone.

Specifically, airlines will allocate these best empty seats to passengers who have not selected a seat. So if you put yourself in that pool, you have a chance to score an even better seat than those who paid extra for seat selection up front.

Of course, there’s a potential downside: You could very well get stuck in a middle seat in the back of the plane rather than being upgraded. But if you notice that your flight is full and few passengers have opted for the right main cabin seats, skipping seat selection altogether can be an expert-level travel decision.

Do not pay for seat selection in advance

Airlines are playing the same game. They want to show the lowest possible fares on search results and then sell you incentive prices at checkout. This drip pricing tactic is a pain for passengers. Charging for seat selection is a last minute way for airlines to make money.

Know your options and avoid their deception. Skip seat selection altogether or travel with an airline with limited seat costs, such as Alaska, Hawaiian, or JetBlue. Everyone charges little or nothing for the choice of a seat. In the worst case, you will end up in the middle seat. Ideally, you will get a seat with more legroom.

The article How to Navigate the Expensive Airline Seat Selection Fees originally appeared on NerdWallet.